We left Lexington Tuesday morning on our way to Oklahoma for a visit with our cousins Margaret and Michele and their families.  Outside of Versailles (Kentucky, not France), we saw this surprising castle. Might be an interesting story.

We were ready to be home, but very excited to see our cousins.  We decided to just jam on the road to get there.  Filled our coffee cups with Starbucks and hit the road.  We drove through the rest of Kentucky, Tennessee and on to Arkansas. Our travels took us through Nashville and Memphis but we were so anxious to make it to Oklahoma, we decided not to stop.  I think we will make another trip to the area as we enjoyed spending time with Kelly and Shelagh.  Sounds like we might need to take the Bourbon Trail in Kentucky with them sometime.  We will do Nashville and Memphis on that trip. We were heading to Fort Smith, but didn’t quite make it because we were too tired.  We finally pulled over in Russellville, AK, finding a room at a La Quinta motel around 7. We had a good dinner at the Ruby Tuesday’s next to the motel, and a good night’s sleep.

Wednesday morning we took off for the final leg through Arkansas, Texas and on to Oklahoma. It poured rain most of the time that we were driving.  Absolutely the worst weather we had on the whole trip.  A few times we couldn’t even see the car in front of us.  We knew we had short day, as we planned to be in Oklahoma City by midafternoon.  Shortly before we got to OKC, the rain stopped and we made it to our cousins, Margaret and JB Phipps’ house with no problems.  Margaret’s sister Michele came over and we spent the rest of the afternoon talking non-stop.  It was Halloween night so Margaret’s daughter, Megan brought her two youngest over and we got to see them in costume, after a short visit with Megan and Jason, and Margaret’s other daughter, Margo, (unfortunately, we did not get to see Mara and her family, but another time.) the family left to go trick or treating (fortunately, the rain had finally stopped).  Michele’s partner Sherman came over for dinner and we watched all the dressed up princesses, ghouls and goblins come to the door for a treat. We stayed up very late talking and had a wonderful time.

Thursday morning we got up and did our favorite thing, laundry.  Margaret took JB to a doctor’s appointment, so we had the house and all there appliances to ourselves.  When they got home, Michele came over and we all went to lunch.  We had a fabulous dining experience at a restaurant called Vast. It is on the 49th floor of the Devon Tower in OKC.  The day was beautiful and sunny, and the view from the restaurant was fabulous.  Lunch is served as a buffet, but this in not like any buffet you have been to before. They call it a daily table menu. The menu changes weekly.  We were treated to a beautiful salad bar with homemade dressings (the tomato vinaigrette was outstanding and I want the recipe!) with homemade rolls, homemade hummus and pita. There was a wonderful cheese and apple soup with pecans (another recipe I want).  Hot dishes included roasted potatoes with feta, braised cabbage and onions, green beans almondine, pasta alfredo with shrimp, chicken in a mushroom gravy, roasted pork and roasted lamb.  The desserts–brownies, crème brulee, banana cake, raspberry mousse, and 3 or 4 more that I can’t remember–were all good and cut into small pieces so you could taste everything.  Good thing I don’t live in OKC because I think I would go every week! We had been enjoying our visit so much, talking and laughing that we forgot to take pictures (argh!) 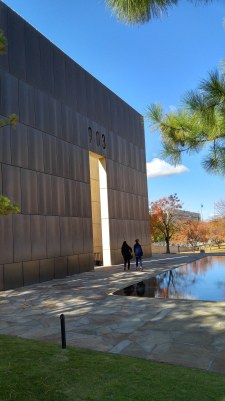 After lunch, we took time to go to the Oklahoma City National Memorial.  Michele, JB and I spent time walking through the chairs and looking at the reflecting pond.  At either end of the pond is a black gate. On the east wall, the time 9:01 is etched, symbolizing the last moment of innocence in OKC.  On the west wall, the time 9:03 is etched, symbolizing the moment rebuilding began.  In the unnamed moment, 168 men, women and children perished at the hands of a domestic terrorist on April 19, 1995.  The memorial is incredibly moving.  We didn’t go to the museum, but we did stop at the church across the street.  Old St. Joseph’s  Church was badly damaged in the blast and installed a beautiful statue “and Jesus wept” on the corner. The whole experience was moving.

Then it was back to the Phipps and more visiting.  BBQ for dinner later that evening and late to bed.  We were up early next morning because Margaret had to go to work.  We wanted to say good bye before we took of on the final leg of our journey.