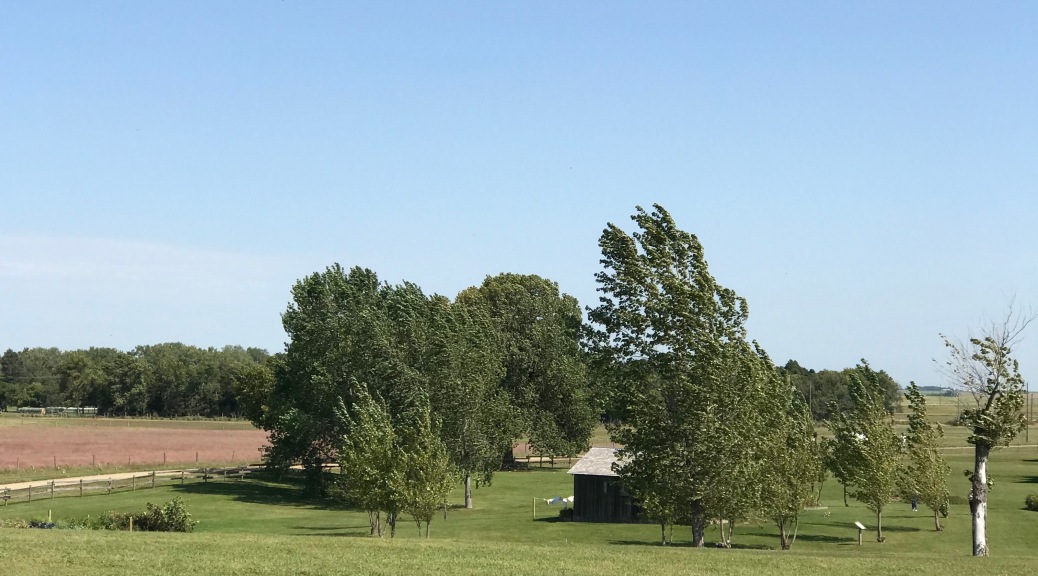 After we left Miller we headed toward Mitchell, SD to see the Corn Palace. On the way to Mitchell, we stopped for dinner at a great Mexican Restaurant, Yessica’s, in Huron, SD.  We both had yummy enchiladas, Kathy’s beef with a spicy red sauce and mine chicken with a delicious green sauce. Quite worth the stop. It was after 6 by the time we arrived in Mitchell, so we found a lovely motel, Kelly Inn, that was covered in bears, to stay until morning.

Headed off to the Corn Palace in the morning.  Discovered that in the late 19th and early 20th centuries, towns were competing for tourists and wanted to bring more people to their own town.  Mitchell started the Corn Palace in 1892 and it is the only Corn Palace in the world.  They decorate the building every year with $130,000 worth of corn in multiple colors.  All of the murals are made of corn.  Of course, we had to have our pictures taken with the corn stalk, too. 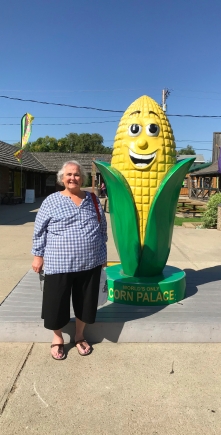 Bridget at the Corn Cob 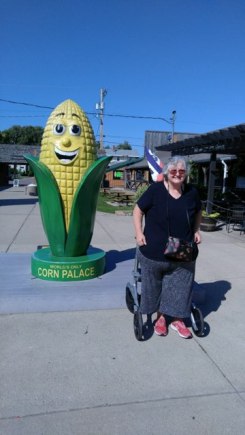 Kathy at the Corn Cob

We debated whether or not we would go to De Smet, SD for the Laura Ingalls homestead, but love of the Little House books won out. Both Kathy and I read the books as children, but I was obsessed with them. From the time I discovered the books at around 8, until my mid teens, I re-read the series, in order, nonstop.  Every time I went to the library, I checked out the next book.  If the book I was due to read in the series was out, I read Farmer Boy instead.  Five of the books, from By the Shores of Silver Lake on, took place in the De Smet area.  So of course we ended up at the homestead.  The family that runs the place has done an awesome job. They have recreated a sod house, a small homesteader’s cabin, Ma’s house. There is the schoolhouse that Laura attended and many hands-on activities.  It would be a wonderful place to take children, and you can even camp there. There is also a museum on site, as well as a house in town to tour.  Almost more than one can see in a day. And on top of everything, they had golf carts for disabled people so Kathy was able to enjoy everything.

Now on to Minnesota and the SPAM Museum!