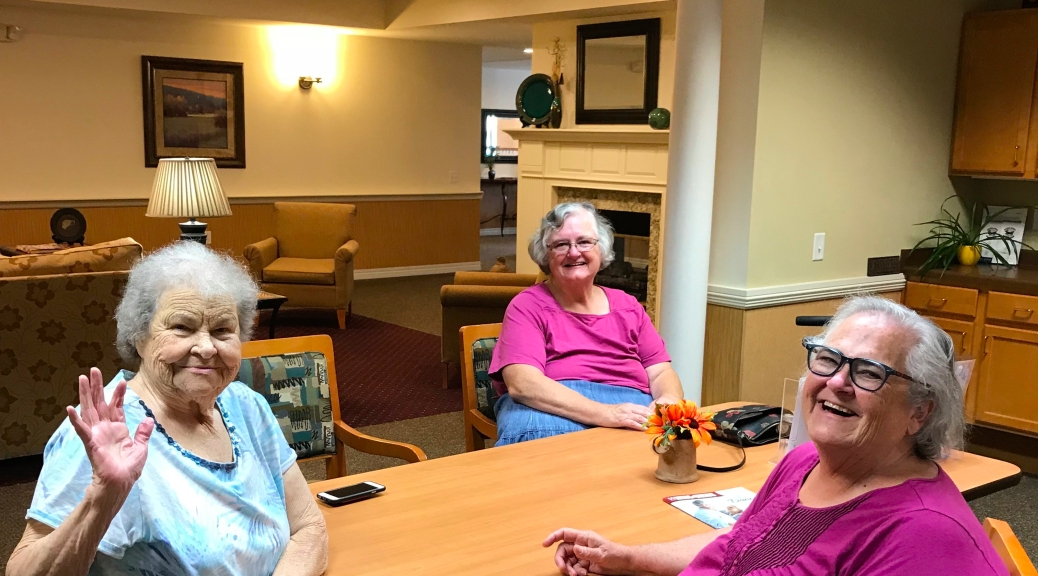 We left Rockford and stopped at a truck stop called The Iron Skillet for breakfast, before wending our way through Illinois to Pekin, IL. We had the delight of meeting up with our cousin Joanne and her husband Terry. We hadn’t seen them since their honeymoon almost 40 years ago, but we had spent a couple of summers with Joanne as teenagers when she spent time with our Grandparents and Aunt Peggy. It took only minutes fall back into our relationship and we talked up a storm!  Around 2:30, we went to the senior living center that our Aunt Rosie lives in. She is one of our dad’s 8 sisters and always fun to be around. She does have Alzheimer’s disease, but she was in good spirits when we saw her. We told stories, laughed and had a wonderful visit with her.
Later in the evening, Joanne’s brother, Jim, and his wife and daughters came to visit too. Kathy and I had seen Jim last year when he was in California so it was wonderful to meet Maureen, Rachel and Colleen after hearing stories about them.  After they left, Joanne, Kathy and I stayed up late talking, even though we all had to be up early.

Next morning, Joanne and Terry got up at the crack of dawn to leave for St. Louis as they had tickets for a noon Cardinal’s game.  We slept a little later, then got on the road to head to Detroit, MI to spend a few days with our brother, Terry, and sister-in-law, Miriam.  We arrived late, found a motel  and made plans to go apple picking with Daniel, our nephew, and his family on Sunday.