It’s Sunday in the middle of September and we are in Livonia, Michigan, just outside of Detroit. A few trees are barely beginning to change colors…or at least fade. The air should be crisp and clear because we are going apple picking with my nephew, Dan, his wife, Amy and his three children. Unfortunately, the temperature was close to 90. Nevertheless, the Flanagans joined with the Markos’ and went into the groves, without me because it was too far and too rough with my mobility issues. 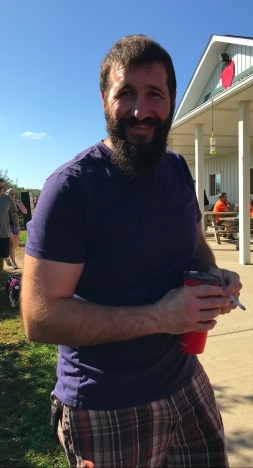 Our nephew, father of those kids.

Soon there will be another darling little one.

When they got back to the activity area we had a grumpy 7-year-old who was tired, hot and didn’t think it was fair he walked so far. So we got donuts and cider. That, some time to sit, coaxing from his sister, and loving from his two great-aunts raised his spirits and he was ready to take off with the aforementioned sister to pet llamas, went to see the bee guy, and went on a ride or two. 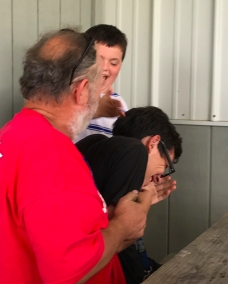 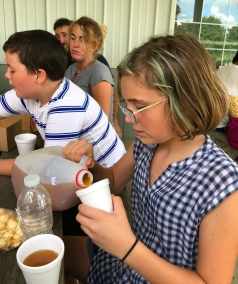 Donuts and Cider after a long, hot walk. 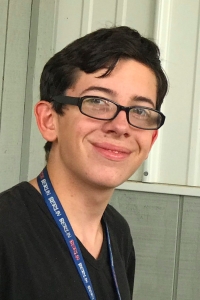 Meanwhile, we adults and near adults (my oldest great-nephew would turn 16 in about a week), were sitting in the shed and talking. Then my brother, Dan’s father and our brother, showed up and more talking took place. I spent some time talking to the eldest of Dan’s children who is such a great kid.

Later that afternoon we went out for Detroit style pizza with my sister-in-law, Miriam, and her brother Kurt at a famous Detroit Pizza place called Buddy’s. Detroit pizza is a fairly thick crust cooked in a pan and is square. The toppings are put under the cheese and cut in rectangular pieces. It was good. Then we went to Terry and Miriam’s house

On Monday, the same five of us went to the Henry Ford Museum in Dearborn. I got an electric scooter and that let me keep up with the rest of them. The museum is really well done showing the development of technology and its relationship to the culture of the time. It is also too big to see in one day. We saw trains, planes and automobiles and had a rest and sweet in a working diner in amidst the roadsters and sports cars. I decided that I would not mind having a 1929 (I think) Bugatti—one of 6 made is in that museum and it is gorgeous. Of course, I’d need a mechanic on staff as well.

We stopped at Sheesh—a middle Eastern restaurant that was very good and made their own pita: little bitty pitas. Terry and Miriam came over to the motel to talk and say goodbye (to Miriam, who had to go to work the next day).

On Tuesday, we went to Savannah and Bernadette’s home (the dogs who really own Terry and Miriam abode) to do laundry and Terry joined us after a dentist’s appointment. Bridget had particularly wanted to go to a Detroit “Coney’s Restaurant” so Terry took us to Senate Coney Island Restaurant. After hugs and kisses, we took off for Canada…an adventure in its own.