We arrived in South Yarmouth on Cape Cod but were still so full from our late lunch at Wahlburgers that we skipped dinner. We have been feeling the effects of the hurricane in Florida and there has been a lot of rain and cloudy days.  Saturday morning continued that trend and we debated about what to do in the rain.  We finally decided to go to Hyannis and see the John F. Kennedy Hyannis Museum. Before we left for the Museum, Kathy called to see if they had a wheelchair that she could reserve as her knee was really acting up in the rain.  The phone system was a little confusing, but she finally got hold of a person named John who was delightful and was able to have the chair waiting for her when we arrived. Turns out that Kathy got hold of John L. Allen, the president of the museum foundation.  He met us when we arrived and gave us a quick orientation.  Everyone we met was charming!  The museum itself mission statement is that it “preserves and promotes the legacy of President Kennedy, his family, and their deep connection to Cape Cod.” The exhibits we saw were “Creating Camelot: The Kennedy Photography of Jacques Lowe”, “JFK at 100: Life & Legacy” and “Robert F. Kennedy: Ripple of Hope”. We were so reminded of times of hope, courage and public service.  So much of the Kennedy legacy is so needed today. We were reminded of many events that we have lived through.  (Photography of exhibits was not allowed at either destinatio.) 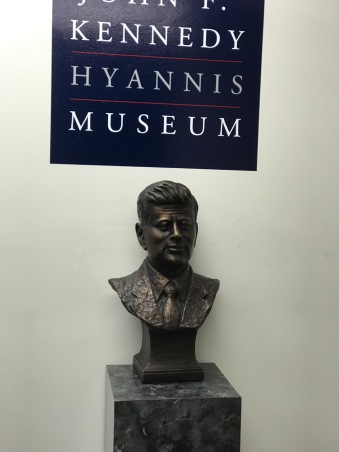 As we were leaving the museum, we asked the lovely lady at the front desk for recommendations for lunch. She suggested we go to Alberto’s Ristorante, so we tried it.  We had a wonderful dining experience.  Started with delicious appetizers, I had eggplant rotini and Kathy had chicken escarole soup. For our main course, Kathy had Scrod Francaise (in lemon sauce, asparagus, tomatoes, artichoke hearts and mushrooms) with linguini.  I had chicken cacciatore with linguini.  For dessert we both had apple crisps.  All of the dishes were excellent! We are finding that on the east coast, apple dishes use a much tarter apple than on the west coast and we are enjoying them considerably.

After we finished lunch, we decided to go to the Whydah Pirate Museum.  This museum tells the story of the Whydah, a pirate ship under the command of Black Sam Bellamy, that crashed off the coast of Wellfleet in 1717.  It was discovered by underwater explorer, Barry Clifford, in 1984 and remains the only pirate ship that has been positively identified.  The museum is a repository for many of the discoveries from the wreck and they are used to tell the story of the ship. Research and excavation continue today on the Whydah.  The museum is very well done and fun for both children and adults.  One of the interesting things we discovered about pirate ships is that they were very egalitarian, with ethnically diverse crews.